Our Patron - St Bernardine of Siena
Feast Day - May 20th 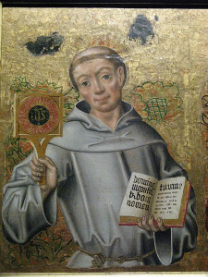 St Bernardine was born to a noble family near Siena, Italy on September 8th, 1380. As a young man he volunteered to care for the sick when an outbreak of the plague struck Siena during the 1400’s. He worked tirelessly throughout the plague and only stopped when he became ill himself. He entered the Franciscan Order in 1402 and was ordained two years later.

St Bernardine was responsible for a renewal of faith amongst all classes of people, for making peace amongst warring factions, and for helping the poor organise “credit unions” to help themselves.

He was an eloquent and captivating speaker, he preached all over Italy and became known as one of best preachers of his time. At the heart of his preaching was Jesus and he designed a symbol for the name of Jesus on a banner with the Greek letters “IHS” at the centre, surrounded by a blazing sun.  Have you noticed it, on the way into St Bernardine's Church at Regents Park?

St Bernardine devoted his entire life to spreading the word. He died on May 20th, 1444 and was canonized six years after his death on May 24th, 1450.

When we began our life as a new parish on 8th September, 1980 we chose St Bernardine as our patron.

Prayer to St Bernardine
Saint Bernardine of Siena, words were very important to you.
You spent most of your life speaking the golden words of Jesus' mercy and his Holy Name.
And you abhorred words that were shameful.
Pray for us that we may always choose to speak Jesus' name with reverence
and choose words of love over words of shame.
Amen.